A Quick Snapshot of Brown Ticks in Dogs

Dogs have become a very important part of our family.

They have their own needs and also suffer from diseases like humans.

As a human being, when we suffer from a certain pain, we visit a doctor or find home remedies but that’s not the case with dogs as they remain in that pain for a longer time.

In case, if they are adopted as pets then the owner takes full responsibility about medication and regular treatment.

Some diseases can be cured by knowing its symptoms and for other diseases, you have to take your dogs to the pet doctor.

There are times when your dog may get a brown tick or tiny insects stuck in their body.

Their behavior gets changed and even they scratch affected part the whole time.

These ticks are of several types and can adversely affect the skin of your dog.

Are you worried about these insects on your pet’s body?

Are the ticks growing in your pet’s body?

If you are also worried that ticks are making your pet’s life miserable then we have given a complete guide to control the menace of this brown ticks in your dog’s body.

We assure you that after reading this content peace you will have several effective treatments for your pet which is easy to use and gives fast relief.

These ticks can come in any part of the body.

But they mostly attack the ears, back of neck or back part of the dog’s body.

We have provided comprehensive information pertaining to this subject divided into various chapters which will enhance your knowledge about brown ticks and also provide an effective cure for the same.

What are Brown Dog Ticks?

Life Cycle of the Ticks

How Can A Dog Get Brown Ticks

How to Remove Brown Dog Ticks?

Chapter -1 What are Brown Dog Ticks? 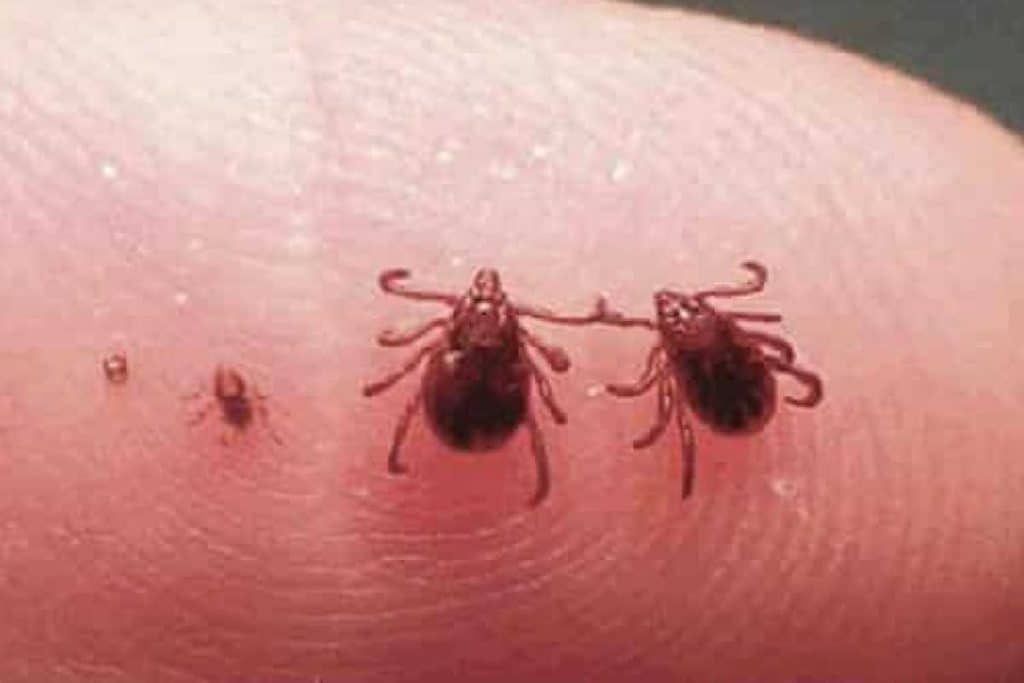 The scientific name of brown dog ticks is Rhipicephalus sanguineus.

Brown ticks are bugs like a spider which feed on the animal as well as human blood.

The main host of this brown dog ticks are dogs.

These tricks are also found on the furniture and bedding of the dogs, so take care of that.

These brown dog tick diseases are found around the world except New Zealand where they are not established at all.

The surprising fact is these tricks come from passengers luggage, clothes and also by the animals which get transferred from one place to another.

These bugs pierce the skin and suck out the blood and that’s the reason they are main prey to transfer disease from one animal to other animals.

The brown dog ticks engorged the part of the body which they acquire and spreads the germs to different other cells.

Brown dog ticks are red-brown in color and they come in different sizes depending on which life cycle they are in.

They have four pair of legs that means a total of eight legs and no antennae.

They become adults with six pairs and consisting of an antenna.

The ticks develop on the skin under the fur. When the ticks are large in numbers in a dog skin, the dog will get scratch and itching on the affected area.

In the forthcoming section, we will explain to you the life cycle of these ticks and how their sizes alter depending upon their life stage.

Chapter- 2 Life Cycle of the Ticks 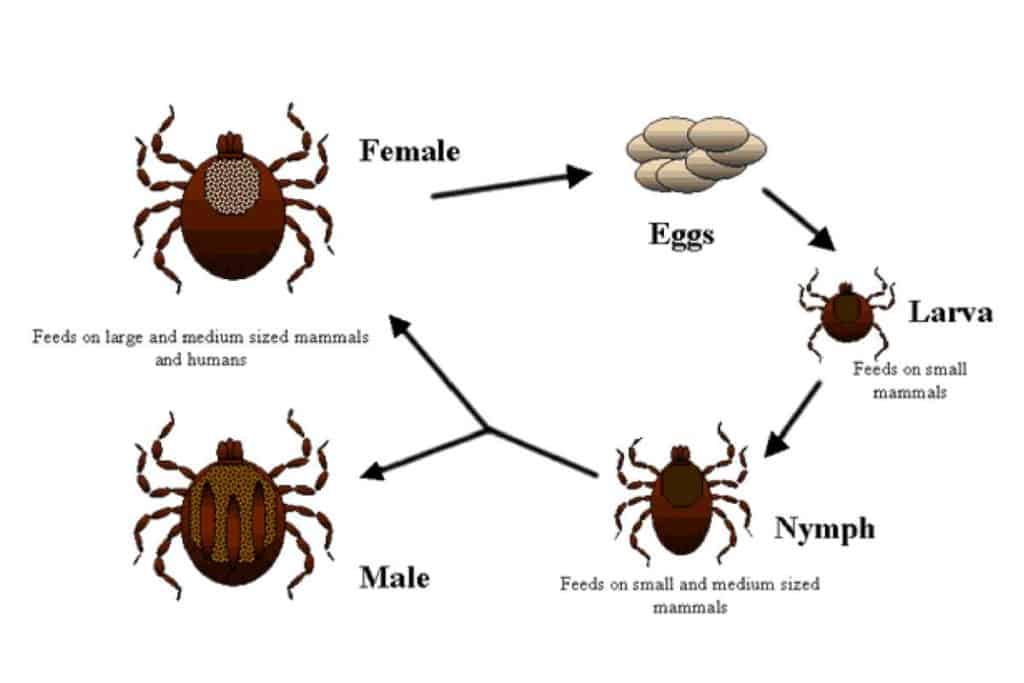 The life cycle of brown dog tick decides the amount of the blood they feed on.

The life cycle starts from a small egg into tick engorged adult.

The four different life cycle they have:

Females ticks who are fed are of one centimeter in length and this is the age when they are most visible.

Sad news: The larva and nymph attack all the part of the dog’s body, unlike adults who stay on the specific parts like toes, neck, and ears.

The adult ticks mostly host animals and they lay their eggs there.

Male ticks die after they mate two or more female ticks. Some may also live for several months.

The female ticks just die after they lay eggs in the protected area of the ground.

Every tick has a different life cycle from 2 months to around 2 years depending upon their species.

Tiny larva feeds on dogs and other animals after hatching eggs.

When eggs turn in to larva, it becomes larger and after that, they develop into a nymph.

The nymph feeds blood from the host and then turns into an adult.

Male and female mate on the host body and then females fall to the ground and that is how the process ends.

Chapter-3 How Can A Dog Get Brown Ticks

Even though you have taken the best care of the dog and provided a hygienic shelter, there are chances that your dog may get a brown tick. 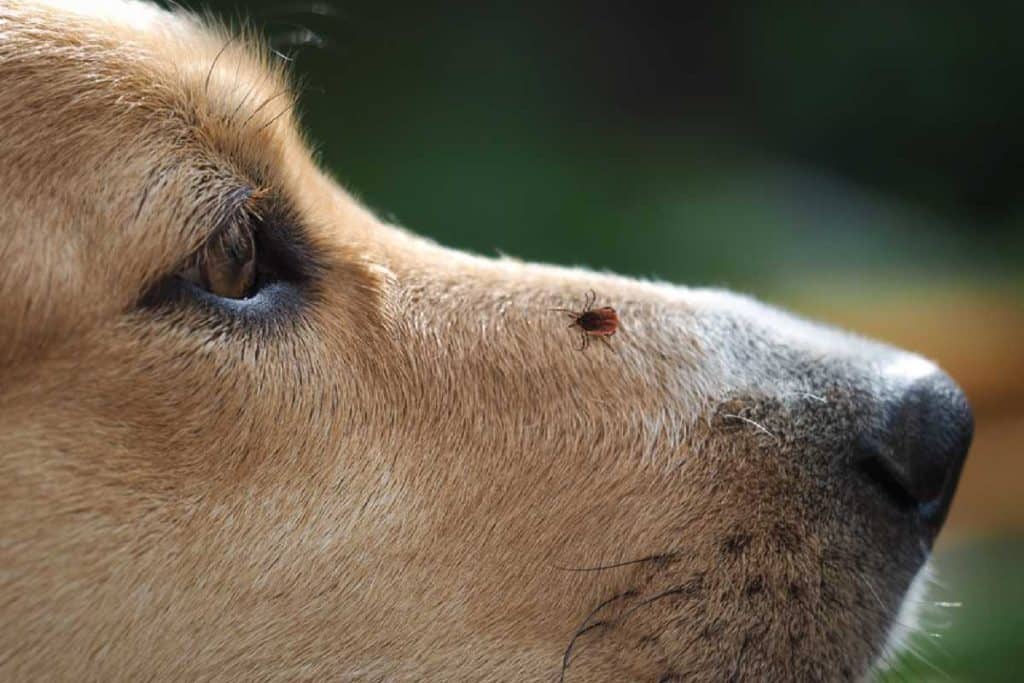 These always wait for the dogs near the grasses and shrubs and not near the trees. So, beware when you are travelling with dogs near the forest area.

When your dogs even come in the contact of the shrubs, the ticks quickly climbs to the host leaving the shrubs they are living.

These tricks can only crawl from the scrubs to the host body and cannot fly or jump.

Note: Winters around 7.2 degrees Celsius are the most common days when the ticks are super active to feed on the host body.

You will be surprised to know that these ticks can complete their entire life cycle sustaining indoors.

The ticks may transfer Rocky Mountain spotted fever and various other tick-borne diseases to dogs, including canine Babesia and canine ehrlichiosis.

When these dogs do not find dogs they attack other mammals around the same area.

Ticks even attack humans if the individuals come into contact or put hands near the scrubs where these ticks are living.

You cannot say the brown tick’s pattern for hosting as they can feed any animal or even humans depending upon the weather and availability of the host.

Their host is mostly birds or bats and they rarely feed on dogs or cat.

Although there are more than 15 species in North America, there is a lesser chance that your dog may encounter with one.

The common species which are more likely to attack your dogs are:

American dog tick has a variety of host which includes humans and dogs.

They are mostly seen in the forest and gardens so there is a rare chance that they infest the homes.

The ticks are found largely in North America mostly the regions of southern united states near the coastal regions and other humid areas.

They attack those humans or animals which they found near roads, paths, and garden areas.

The ticks are most likely to attack their host during springs.

The interesting thing is that Nymphs can survive without food up to 584 days and more.

Adults choose large animals as food and can live up to 2 years without having food.

They are always in the waiting position and frequently attacks their prey.

The male lives on the host body and completes the process of matting.

Females feed, mate, and then get engorged ends into falling in the ground.

The American dog tick is typically known as outdoor ticks.

These species are dependent on climatic and environmental circumstances for its eggs to hatch.

Lone star is of the brown and tan color where females have silver-white spots and males have scattered white spots.

Adults who are into the process of feeding host are about ⅓ inch long. The females after feeding may turn to ½ inch.

Larvae and nymphs feed on wild animals, birds as well as rodents.

They live largely on woods and brushy regions where there is less human habitat.

In all the three stages they are dependent on animals who are near water, brushy regions and humid climate.

They are present in all seasons but the main period is between March to May.

Larvae and nymph mostly are engaged during June to August depending on their life cycle.

The specialty of this ticks is that they hatch their eggs during spring and larvae feed on mice as well as other mammals.

The adults are ⅛ in the size and choose deer as their prey.

These black-legged tick can transmit  Lyme disease and anaplasmosis to dogs and as well as humans.

The common name of brown dog tick is kennel tick.

The brown dog tick is found through most of the United States and can spread ehrlichiosis.

The ticks mostly fed on dogs and rarely attack humans.

The unique thing about these species is that they can survive both indoors and outdoors.

They can also spend their entire life staying indoors.

The ticks mostly live indoors as it is not possible for them to survive in the coldest temperatures.

The female ticks are capable of giving 3000 eggs throughout one life cycle.

To help the dogs from Brown dog ticks these are some of the remedies you definitely use.

You can use blunt tweezers or gloves to handle the tick.

Secure them with the paper towel.

It is dangerous to directly put fingers on the ticks as they may go directly into your skin.

You can remove it directly by scratching with a pointed instrument so they can be removed by their head.

Pull it out and give enough pressure so that they can be removed easily.

It is not advisable to twist or turn as the mouth of the insects break and the germs can be in the skin.

It is not possible that for the first time the tick will leave the skin, try doing it twice or thrice with pressure so it can be removed effectively.

Pull and pressure the ticks and then only it will get a release.

After removing this ticks from the dog’s body, wash your hands with soap and water.

Many people suggest applying petroleum jelly and grease which is surely not recommended by us.

Make sure you don’t use any such technique by which you are not familiar as it will not only affect the dog but also will affect your whole family.

If you get to know that your dog’s health is becoming worse, it would be a high time that you visit a pet doctor.

Take proper treatment which will help you to prevent more diseases in dogs as well as other family members who are likely to get infected by these diseases.

It is not easy to take care of your dog and when your furry pal is in pain. It is really impossible for you to see.

Though it is not necessary that your dog can get this ticks but even though they get one, do not worry, simply try to cure him as soon as possible.

During morning walk with your dog, make sure that you do not come in contact with any scrubs which are having these ticks.

Prevention is better than cure so keep your dog in a hygienic place, make him do the exercise, provide food which contains high protein, and gives a lifestyle which enhances their health.

It is necessary that the dog gets proper vaccination and also you must take him for regular treatment especially during the tick season.

Use dog shampoo to keep the dog’s fur-free from any type of germs.

At Pugs Home – we provide insightful information pertaining to various dog breeds. We ensure you of delivering quality write-ups that will help you know more about your fur babies.

Dogs, regardless of the breed is one of the greatest human stress relievers of all time. You deserve to know the most important dog facts so you can handle your pooch better and avoid major accidents too! You’ll never know when they are useful.